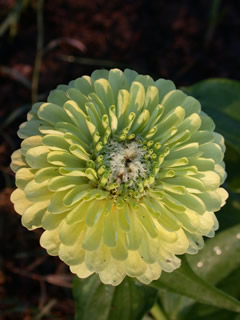 Unique color (10); More double than ‘Envy’ (5); More consistent than ‘Envy’ (3); Good flower form; Uniform plants, good germination, very strong stems, high percentage of double flowers; Great if you like a green zinnia; Large 2-22 inch flowers with nice colors that held better than ‘Envy’, but still browned too quickly; Good height; Great production, good vase life; Was good for bouquets; First ones to flower were mostly double flowers; Super fast crop; An improvement over ‘Envy’ – When flowers matured fully and without damage, they were exquisite in color and form (unfortunately these were infrequent).

Browning on petal tips (5); Powdery mildew (4); Many single or semi-double flowers (3); Small flowers (2); Flowers smaller than other Benary Giants (2); Too short (2); Poor germination (2); Still seems to bleach out in the sun to a lighter color; Color not uniform, color fades later in season, later stems not useful; Slightly weird color – Difficult season, leaf disease an issue (even with drought conditions); Low yield per plant; Had problem with hydration early in planting, but not later in season (zone 6b); Insects (striped cucumber beetle and green corn rootworm beetle) seemed to love this flower – The majority of the flowers never fully matured – be it insects, weather, or genetics – Eventually I cut blooms in the premature state and these were ok but certainly not what they could or should have been.

Editor note: See Postharvest Report in this issue for vase life and handling information. Similar to ‘Envy’ (5); Superior to ‘Envy’ (2); This is no improvement over ‘Envy’, which has been available and unimproved for decades; We pinched out the first terminal and harvested all other shoots – Planted 30 at 3′ wide bed 3 rows at 6; apart – Hand seeded 6-8; apart on row; Will try again probably do better with a more typical summer (less heat more moisture); Not similar to ‘Envy’; Harvested until frost (Zone 6/7); Most people passed over green zinnias when buying, those who bought, really loved them; I really like the Benary Zinnias and hope that one day ‘Giant Lime’ can live up to its name in the Benary line-up – It has the potential – Also, despite its smaller size and (often) lack of full bloom, my customers really liked this zinnia and did not question paying the same for it as the larger Benary zinnias; Not as thrifty as other Benary Giants; How long will green be trendy?