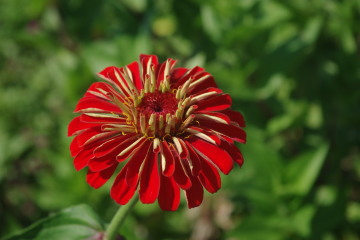 Excellent color (5); A great addition to our collection of zinnia varieties to grow; Double flowers, good stem length and size; Color mixed well with many other flowers for bouquets, nice accent, germination was good, plants grew well and didn’t get mildew until late in season when cool weather started, many stems were not cut because they were short, but that made for a nice color in the field, there were still many useful stems; Nice big flower, strong stems; Even colour throughout plants; Prolific, long-blooming; Uniform flower appearance, medium early; Good stem length, plant height and flower production, uniformity of bloom and almost all flowers having a prominent ring of disk flowers; Very good quality, rich red, unlike other fall tones we have late in the season, vigorous plants with almost no mildew problems, even late in the season.

No problems (2); Very poor vase life as compared with ‘Giant Wine’ which I was cutting at the same time; Color was too bright, impossible to work into bouquets or mixed bunches, ugly; Bad weather made flowers useless if they were rained on a lot, which caused a fungus disease too; Flower not consistently double, Japanese beetles preferred it to the other zinnias in trial!; Not uniform, some nice, some ho-hum; Flower not as large as some; Subject to fungal leaf spot found on all zinnias; Like the white, this variety sometimes had irregularly-shaped flowers, but otherwise it was a great variety; Powdery mildew set in before plants could produce many blooms on a single plant.

Grows the same as other zinnias.

I didn’t think ‘Red Beauty’ had anything special about it to merit choosing it over the reds offered in the Benary series. Postharvest – water quickly became murky; I liked the flower for its bright color and the plant grew very nicely, it was full and had many stems each week; Perhaps due to bug damage, this did not appear to be a professional quality zinnia; I like this one, but not as much as ‘Giant Wine’; Harvested July 20th to Aug. 11 (Planted in the field 6/10, Zone 5); Cornell Trial yield: 7 stems in field, 2 in tunnel and length: 24 inches in both tunnel and field.