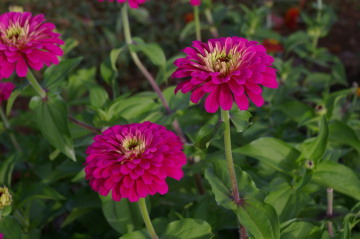 Great consistent rose color (13); Productive (7); Large flowers (6), flower size does not diminish as season advances; Double (4); Tall or long stems (3); Easy to grow (2); Bloomed for most of the growing season; Consistent and uniform blooms; Triple layer (or more) of petals was always there; Very first flowers were 3-4 inches on 18 inch stems, lots of flower from July to September (Zone 9); Early successions especially productive; A standout in the field! A heavy yielder with big beautiful blooms on long, strong stems; Uniform grower; Still a favorite; Not as sensitive to high EC irrigation water; Weeks of cutting in field; Fit in nicely with the other large flowered zinnias in the trail and those I regularly grow.

We had the usual problem of short holding for all zinnias, problems with Japanese beetles and leaf spot; Does not measure up to Benary zinnias; Size of blooms was reduced by each cut, however, was marginally restored to original 4-5in. diameter by severe cutting of side/lower shoots; Late successions seem much shorter, not as productive; Shorter than other cultivars of similar color, more susceptible to zinnia diseases; Mildew; Soft necks, tends to break easily!; Japanese beetles and fungal diseases, used hot pepper spray, hand picked a lot of beetles!; None.

‘Giant Carmine Rose’ (3); Very close in color to Benary Giant Purple, Benary’s Giant is closest, but color not the same.

Japanese Beetles were a huge problem on pink cultivars, especially this one; Would never be without this zinnia! Wish the breeder offered a full range of colors with the commendable attributes of this cultivar!; Are more ‘Uproar’ colors coming along? Harvested between 7/16-8/19 (transplanted to the field May 22); Entire zinnia crop was planted late while I was out of town, this year, I pinched in August and cut back severely in late August which did increase stem length, I could have sold all of the large flowered ones if I’d been able to keep the mildew preventative spray; A winner!!!; Would like to see additional colors; Flower head – 8 cm; Outstanding zinnia added to our collection of things to grow.

We only used plain water; Need cooler temps, unfortunately we didn’t have the facility for storing; Surface sterilize stems in a 10% bleach solution, we don’t use floral preservative with zinnias, we avoid keeping them in the cooler; Used Floralife and picked when fully open.